I left Powell’s City of Books, one of my favorite places in Portland, OR.,  later than I intended. I had coffee with a cousin there and then disappeared into a full city block of books, new and used, a book geek’s dream. For me, time stopped, until I glanced at my watch and felt my face get damp with sweat. 6:30 p.m. I should have been back at my father’s house in The Dalles, OR., long before now. I half ran to the parking lot where I left my mammoth rental  vehicle – a black Ford Excursion so big it failed to fit into any of the parking spots. The attendant parked it for me and took my keys hours earlier.

As I rounded the corner, I felt a splash of sweaty panic  that dampened my shirt. No attendant. His booth was empty. My giant Excursion was there, but it was locked. I went straight to the booth. My tote, heavy with books, cut into my shoulder. No sign stated when he arrived or left. What now? My head started to hurt.  Dusk would come soon. Would I sleep on the pavement next to the rental SUV all night? Shell out big bucks for an expensive downtown hotel? No, and no.  One option was too unsafe, the other too expensive.

Was this my fault? When I parked, the attendant told me he reserved the lot for students, doctors and patients with medical appointments. However, he told me, “I will do you a favor. I will take your car. Park it there,” he said, pointing to a spot so small my real car, a tiny Prius, wouldn’t fit, let alone the huge tank I was driving.

“Fine,” the attendant, a middle-aged man, said. “Stay out all day.” He turned his attention to other customers, and I left.

Now, hours later, I saw on the same sign two phone numbers, one a number for after-hours emergencies. I let my tote drop to the ground and stirred the contents too fast, hoping for a glance of  my phone. I was about to dial when a man walked by and told me he knew the attendant. My keys, he said, were at  another lot eight blocks away.

My brain was as locked up as my Excursion.  I walked the eight blocks with my heavy tote and with relief noted another attendant in the same kind of little booth that grew out of the pavement at the lot where my Excursion was held captive.

The man inside was no help. That morning, the parking attendant had failed to give me a receipt for the Excursion, and now this man asked me why he should believe the tank-like vehicle was mine. I felt tears squeezing out of the corners of my eyes. Why did I cry so easily? A grown woman. I shook my head and asked for a phone number, someone to help me track down my keys. He couldn’t help me. He stopped looking at me.

I asked for the police non-emergency phone number. He gave me that, but I received no help there, either. Call the emergency number for the lot and find out where your vehicle is, a no-nonsense woman at the police department told me. If you can’t find the address, ask people, she said.  No. Sorry. I wasn’t going to advertise to strangers that I was a tourist who didn’t know her way around, not even in my favorite city in the entire United States. I pictured my  dead body half sticking out of a trash can near the Columbia River, discovered by early morning joggers.

“Do you have an emergency phone number?” I asked the attendant who wasn’t looking at me. “Right there,” he said. “Why don’t you just take a picture of it with your phone?” Or, I thought smugly, why don’t I just look at it and dial the number? I reached a human after punching several options that led to voice mail dead ends. The voice on the other end gave me an address that might as well have been in New Zealand. The directions, which the caller fired off too rapidly, made no sense.

Now, I started crying for real. Why are you such a weenie? I whined to myself. A car pulled up with a stranger behind the wheel. By then, I was wiping my nose on my shawl and bawling. “I will take you to get your keys and then give you a ride to your car.” Who was this guy? Ted Bundy, serial killer?  Whatever. I got in.

We drove silently to an enclosed garage in an area of town I did not recognize. He got out, talked to yet another parking attendant, and returned to the car with two giant keys. “These are your keys?” he asked, not unkindly. Yes, yes and yes.

“We’ll make one quick stop and then I’ll take you back to your vehicle,” he told me. We stopped briefly at a lot I had never seen before. The man got out. A lot of people were standing around. I thought,  This is it. The end. I will be robbed, killed, or both, in my favorite city. 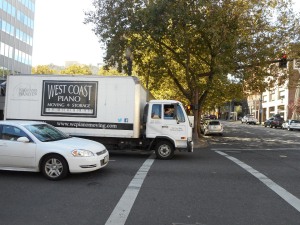 Instead, the man got back into the car, drove me to my tank and dropped me off,  not asking for proof that it was mine. By now, it was almost dark. “I hope this does not change the way you think about Portland too much,” he said. “You are back at your car,” he added, as if I might not understand otherwise.

I thanked him, got out and backed carefully out of my parking spot, my cheeks still damp with tears. Embarrassing. The first full day of my solo travel adventure and the best I could say about it, aside from the paradise of the bookstore, was that I never would see these people again.

I aimed the Excursion for The Dalles, one hour and 20 minutes away.

Songs for the road